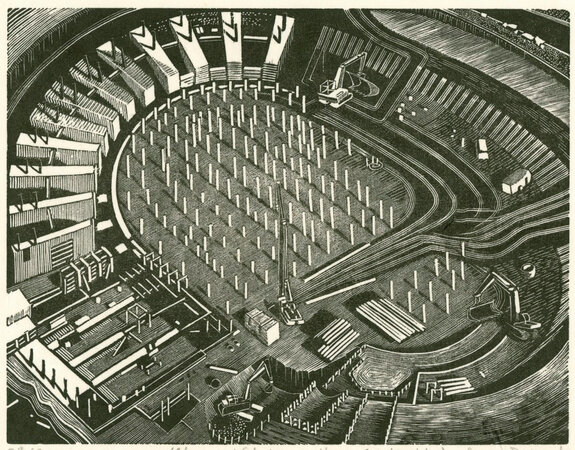 DESMET, Anne RA RE, b. 1964 ~ Olympic Velodrome in Construction.

Anne Desmet responded to the 2012 Olympics by creating a series of prints and engravings that tracked the transformation of the 2012 Olympic site in east London where the artist lives. Her work explores these circular forms from above, London’s regeneration echoing another long standing focus of her work, the form of ancient Rome’s buildings. A print from this edition is held in the Royal Academy Collection.
Anne Desmet was born and brought up in Liverpool and gained her BFA and MA in Fine Art from Oxford and a Postgraduate Diploma in Printmaking from Central School of Art and Design. In 2011 she became the third wood engraver to be elected as a member of the Royal Academy of Arts in its 250 year history. Desmet’s works are in numerous public and private collections across the World including the Ashmolean Museum and the Whitworth Art Gallery. She has completed several important commissions including pieces for the British Museum, National Gallery, British Library, V & A, Bailliol and Worcester Colleges, Oxford, the Royal Mint and Dulwich College. She has had over 30 solo shows to date including three major retrospectives at the Ashmolean, the Whitworth and the Ex Libris Museum in Moscow.
Desmet is engaged with the evolution of the urban landscape and its testimony to the aspirations and experiences of humanity. Her work ranges from small scale, detailed examinations to sweeping, often fantastical, panoramas.