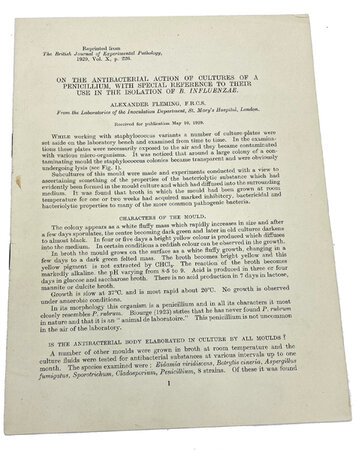 < >
The announcement of the groundbreaking discovery of penicillin

FLEMING, Alexander. ~ On the Antibacterial Action of Cultures of a Penicillium with Special Reference to Their Use in the Isolation of B. Influenza.

Fleming spent his entire career at St. Mary’s Hospital Medical School, University of London, becoming professor of bacteriology in 1929. A noted scientist, his major areas of research were immunology, bacteriology and chemotherapy. His most significant publications are those on antiseptics, the anti-bacterial lysozyme, and this paper on penicillin, which single-handedly ushered in the age of antibiotics saving countless lives. In 1945, Fleming won the Nobel Prize for the discovery of penicillin and the subsequent investigation of its chemotherapeutic properties.
‘In 1944 Fleming commissioned a reprint of 250 copies of his famous paper in response to the renewed interest in his early discovery inspired by Chain and Florey’s development of penicillin. The paper was originally published in 1929 both as a journal article and as an off-print; the original offprint was limited to 150 copies and is now extremely rare.’ (Norman). In fact only 3 copies are believed to have survived of the original off-print and Fleming produced this reprint due to the scarcity of the original.