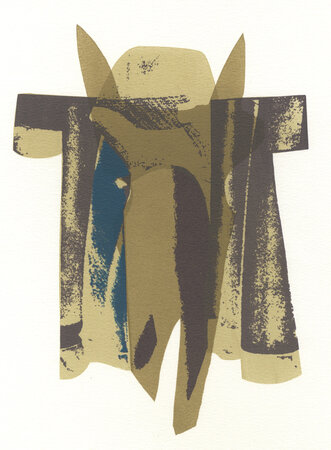 Original silkscreen print, loose in a folder. The folder has been printed by the artist in letterpress with the title and a Chaucer-inspired poem, ‘The Knight’s Horse’ by Andrew Crozier. One of 50 copies, monogrammed in pencil by the artist. Image size 235 x 170 mm. Paper size 380 x 260 mm.

Ron King’s first artists’ book, The Prologue, was printed in 1967 using Chaucer’s Canterbury Tales’ text accompanied by 20 silkscreen mask-like prints representing the major characters in The Tales. He printed a second edition in 1978 and, at the same time, produced 50 sets of the prints, each housed in its own folder, with texts by poets such as Andrew Crozier inspired by Chaucer’s character. There were 20 folders with loose prints, numbered I to XX, and all the prints were signed by the artist.
Andrew Crozier (1943-2008) was a leading poet, a radicalist presence in The British Poetry Revival and an energiser of other poets’ work.
Ron King is probably the most important book artist working in Britain today and continues to produce outstanding, innovative work, leading the way in this art form.