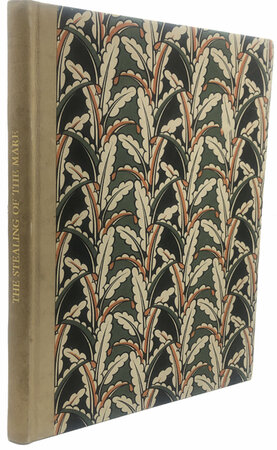 GREGYNOG PRESS. BLUNT, William Scawen & Lady Anne. ~ The Celebrated Romance of the Stealing of the Mare.

Wood engraved frontispiece and 13 decorated initials designed and engraved by R.A. Maynard, all hand coloured and illuminated with gold. One of 275 copies, this one inscribed ‘Out of Series’ with a couple of excised areas from the colophon where a number would have been. Printed in Garamond type on Japanese vellum. Tall 4to., original calf backed, patterned paper covered boards, spine lettered in gilt. Spine only very slightly darkened with few small marks, tiny bit of rubbing to the very edges and other than the excised spaces on the colophon page, a very good copy in a later cloth slipcase.

One of the cycle of tales from the important medieval Islamic romance of Salame Abu Zeyd translated from the original Arabic by Lady Anne Blunt and done into verse by William Scawen Blunt. Interestingly T.E. Lawrence rejected £20,000 to write an introduction to the book on the grounds that it was an Eastern subject.
A magnificently decorative book and one of the best produced by the Press. This copy has a printed leaf tipped in which declares, “The leather on the back of this book has been made from fresh skins of English calves by G.W. Russell & Co of Hitchin who, advised by Mr. Douglas Cockerell, have succeeded in producing skins with the natural surface unimpared, which, it is confidently expected, will prove to be durable as the ‘calf’ used for binding in the fifteenth and sixteenth centuries.”
Originally purchased directly from the remnants of the press which belonged to a Davies family member, this copy was then in a private collection for several years. This may well have been used by the press as a display copy.