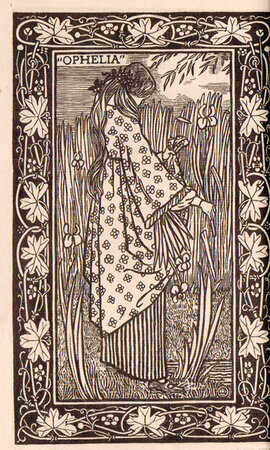 < >
Inscribed by Lucien Pissarro to Diana White, a close friend and author of one of the Eragny Press books

Frontispieces, double borders and 14 initials wood engraved by Lucien and Esther Pissarro. Each volume one of 220 copies printed in Vale type in red and black on handmade paper. 8vo., quarter bound in grey paper with title in gilt on upper left hand corners and on the spines, wild sorrel patterned paper covered boards. Very slight slight darkening to spines, slight darkening to patterned paper as normal, spine of volume II bumped at head and tail with a couple of small spots of rubbing, the usual browning to endapers. Errata slip inserted loose and with an inscription from Lucien Pissarro to Diana White in the second volume. In general a very good set.

After launching the press with two works in English, Pissarro wanted to market his books in France so he printed two volumes of Laforgue’s stories including Hamlet, Pan and the Syrinx, Salome and Lohengrin to appeal to French collectors. One hundred copies were reserved for the ‘Mercure de France’, 76 were for sale by Hacon & Ricketts and the rest went to family and friends.
The elaborate foliate borders around the frontispieces were inspired by William Morris.
Esther Pissarro and Diana White had been friends since art school and a couple of years after this inscription by Lucien, Esther decided to publish her The Descent of Ishtar, based on an ancient Assyrian tale, which had been published in the New Review in 1897. Unusually the frontispiece, which shows Ishtar's lover, Tammuz, in the Underworld was by the author rather than Lucien, who didn't really like what he called her 'Neo-Pre-Raphaelite' work.