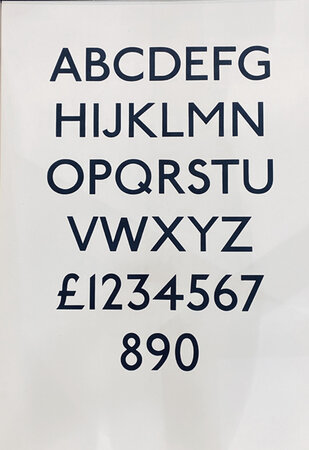 < >
A record of Johnston Sans created by Edward Johnston for London Underground in 1916 - this a unique archive set of proofs for the edition of only 16, none of which were for sale

Printer’s archive set E (of 5). Title page, 25 sheets of specimens displaying complete alphabets of all sizes of type and a colophon, all printed on white machine catridge paper. The first specimen sheet shows the three sizes of cast metal type that were produced from Johnston’s design, and is printed from original foundry type cast by the Steven Shanks Foundry., the remaining 24 specimens show wood type from 5-line pica to 24-line pica and are printed from the original wood. In addition this set includes
1) an early trial proof of 2 alphabets (10-line pica and 8-line pica) which were done to check the condition of the type
2) Early proof of 5-line pica Medium and Bold printed on Moulin de Gue mould-made paper as a sample
3) Proof of the unused text for the Title page
4) Grid overlay used as a guide to consistency in teh setting-up and spacing of each alphabet
5) Trial proof for sheet 21 with compositor’s notes
6) Two discarded sheets from first printings - letters from Gill Sans wood type had got into cases of Johnston Sans at London Transport which were not noticed until printing had begun - Sheet 10 - used Gill Sans R by mistake & Sheet 12 - used Gill Sans 6. These were reprinted using the correct types.

Johnston Sans is an icon of type design, created by the great letterer Edward Johnston for London Underground in 1916, it is arguably the first modern sans serif and is a globally recognised and one of the most successful typefaces for corporate identity ever created and the only one still in use after over 100 years.
In the early 1990s Ian Mortimer was commissioned by London Transport Executive and the London Transport Museum to design and print a portfolio of archive proofs as a definitive record of all the original Johnston types which he designed for London Underground in 1916 still extant in wood letter or foundry metal. The aim was to record this most celebrated of proprietory typefaces in its original form before the revisions of the 1970s and the comprehensive redesign of the typeface in the 1980s.
The edition of only 14 copies and 2 printer’s proofs was not to be for sale. It was printed on the Albion and Columbian hand-presses at Ian Mortimer’s Press I.M. Imprimit in London in 1993. In addition Ian Mortimer assembled 5 complete sets, Archive Sets A-E, made from good extra sheets printed at the time of the edition. Each set contains the 27 sheets of the 1993 printed together with unique archive material.