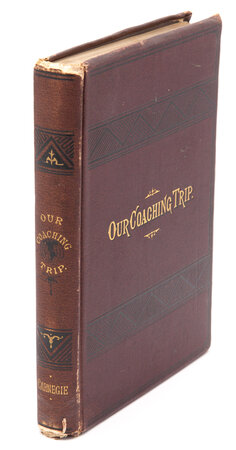 < >
Inscribed by the author

First edition. Pp. 8vo., publisher’s original plum bevelled cloth. Slight rubbing to spine and corners, with chipping to the head and tail of the spine, a little wear to edges of the endpapers, otherwise good.

Inscribed in ink on the title: ‘Commodore Glover and his wife, with compliments and thanks of their friend, The Author’.
The record of the journey at the back states the dates of the trip undertaken by the ‘Gay Charioteers’ from June 17th to August 3rd and which inn the travellers stayed in each night as well as how many miles they covered in a day.
Actually more interesting than just a travel book, Carnegie comments on the economic, social, and political differences between America and Britain, what the unknowing British have to fear from American exports: ‘Some of the good people of Britain who are interested in land believe that the competition of America has reached its height. Deluded souls, it has only begun!’, the superiority of the pronunciation of British choirs, the ceremonies welcoming him, especially in his home town of Dunfermline etc. A pretty good read.