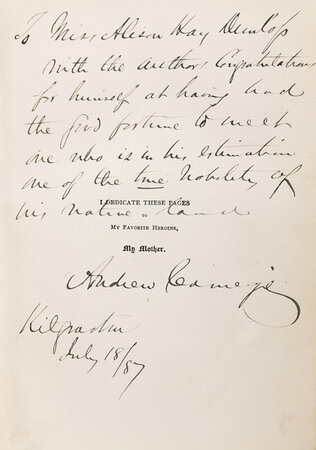 < >
Inscribed to the Scottish antiquarian and writer Alison Hay Dunlop

First edition. 8vo., original boards but the front board is really rather stained with wear to top and bottom of spine.

A superbly INSCRIBED copy of Andrew Carnegie's account of a summer coach tour around the British isles. This copy was signed during Carnegie's summer-long honeymoon spent on the Kilgraston estate in Scotland that followed his marriage to Louise Whitfield. The author records in his autobiography how '’We enjoyed Kilgraston, although Mrs Carnegie still longed for a wider and more Highland home. Mathew Arnold visited us, as did Mr and Mrs. Blaine. and many friends.' Also among those friends was the Scottish antiquarian and writer who received this book. Carnegie has written the inscription over the printed dedication to his mother: 'To Miss Alison Hay Dunlop With the Author's Congratulations at having had the good fortune to meet one who is in his estimation one of the true nobility of his native land. Andrew Carnegie. Kilgraston July 1887'. Alison Hay Dunlop was the author of 'The Book of Old Edinburgh and Hand-book to the old Edinburgh Street' which had been published the year before.