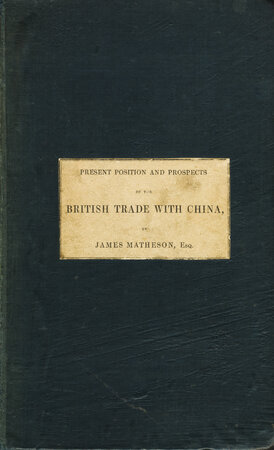 < >
Inscribed by the author

MATHESON, James, of the firm of Jardine, Matheson & Co of Canton ~ Present Position and Prospects of the British Trade With China; together with an outline of some leading occurrence in its past history.

First and only edition. Pp. {8}, 141. 8vo., in the original green silk cloth binding with a printed paper label on the upper cover, the joints have been extremely carefully restored.

INSCRIBED by the author to ‘Col. Oswald with the Author’s Compts.’
An assessment of the history and present state of trade in China. A man of his time he holds China to be ‘a boundless field a indefinite curiosity and vague speculation’ which afforded a vast field for commerce, even under the most discouraging circumstance which resulted “in opening a communication between Europe and China, which has led to an annual interchange of millions of capital”. He delves into the recent history of trade with China and the actions of the English government. He has some interesting chapter on negotiating with the Chinese, on duties levied on foreign trade in Canton.
The last parts of the book are clear statements of British trade in Canton including imports and exports, in 1834 and 1835, the latter with a couple of corrections in pencil. The imports include opium and cotton from different parts of India, ivory and elephant’s teeth, lead, spelter, quicksilver, tortoise shell, coral, sharks’ fins, amber, pearls etc, the exports from Canton include tea, silk, sugar candy, rhubarb (the Chinese were often wary of the ‘barbarians’ interest in their rhubarb), arsenci, indigo, nankin cloth, vermillion, gold jewels, marble, and bamboo.
Very scarce. Only seven copies listed on WorldCat 6 in the UK and one in the Zurich Zentralbibliothek. Apparently no copies outside Europe. Only one copy in auction recorded, being this copy.