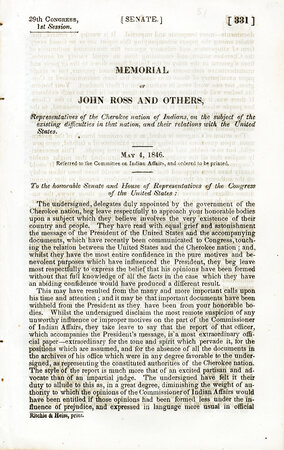 ROSS, John. ~ Memorial of John Ross & Others, Representatives of the Cherokee nation of Indians, on the subject of the existing difficulties in that nation, and their relations with the United States. May 4, 1846. (Referred to the Committee on Indian Affairs, and ordered to be printed).

59pp. A disbound pamphlet without binding. In very good condition.

29th Congress, 1st Session: the Cherokee nation claims financial restitution for their lands under treaties of previous years, including those of 1828 and 1833. Ross was born in Turkeytown, Alabama, along the Coosa River, near Lookout Mountain, to Mollie McDonald, of mixed-race Cherokee and Scots ancestry, and Daniel Ross, a Scots immigrant trader. He was also known as Guwisguwi (a mythological or rare migratory bird), and was Principal Chief of the Cherokee Native American Nation from 1828 to 1866. Described as the Moses of his people, Ross led the Nation through tumultuous years of development, relocation to Oklahoma, and the American Civil War.