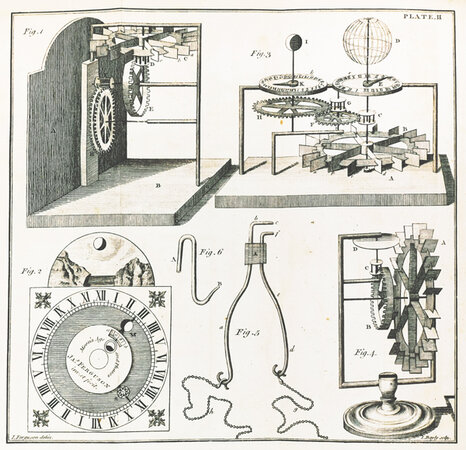 FERGUSON, James. ~ An Introduction to Electricity. In six sections.

First edition. 3 copper engraved plates by Bayly after Ferguson. First printed form of 6 lectures given on the subject. Illustrated with copper plates. 8vo., a very good copy in a contemporary calf binding, with slight cracking to the spine.

Elihu Thomson’s copy with his signature and bookplate of the Elihu Thomson Collection of the Franklin Institute Library, deaccessioned. Initially Ferguson’s lectures dealt mainly with astronomy and mechanics, and resulted in his hugely successful textbooks Astronomy explained upon sir Isaac Newton’s Principles (1756) and Lectures on Select Subjects in Mechanics (1760), but from 1768 onwards he included electricity in his lecture courses, and as this topic was not covered in his two text books he produced this introduction.
Elihu Thomson was born in Manchester in 1853 and grew up in Massachusetts. He became one of the most prolific inventors in US history, eventually joining Thomas Edison to form the General Electric Company. Thomson was granted 696 US patents for various types of inventions related to electricity, including arc-lights, generators, electric welding machines and X-ray tubes.