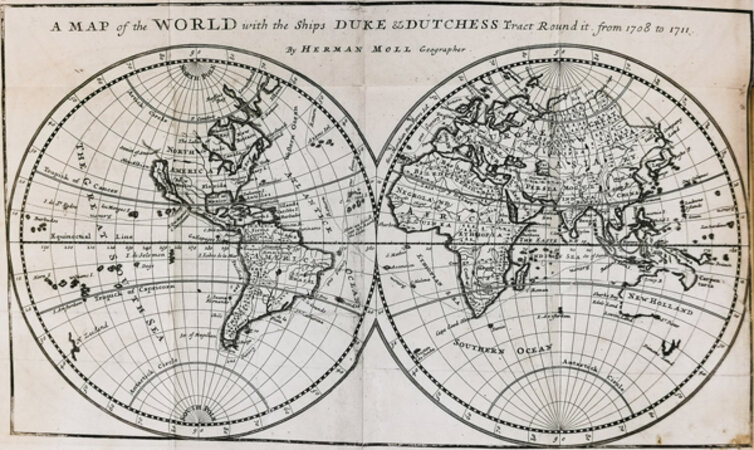 < >
A classic of British buccaneering, an important Pacific voyage and the source book for Robinson Crusoe

ROGERS, Woodes. ~ A Cruising Voyage Round the World: First to the South-Seas, thence to the East-Indies, and homewards by the Cape of Good Hope. Begun in 1708, and finish’d in 1711…containing a Journal of all the Remarkable Transactions…an Account of Alexander Selkirk’s Living Alone Four Years and Four Months on an Island….

First edition. Pp. xxi, [1], 428, 56, [14]. 5 folding maps. 8vo., later speckled calf, decorated in gilt, immaculately rebacked in period style with extra gilt spine, all edges gilt. The inner edges of the boards are slightly crackled and the world map, often missing, is backed with linen with a few small surface repairs but in all this is an unusually good and crisp copy, in a handsome binding.

Contemporary ownership inscription of R. Hopwood dated 1716.
First edition of one of the classics of British buccaneering, and an important Pacific voyage. Rogers went out via Cape Horn, rescued Alexander Selkirk from the island of Juan Fernandez (making this the source book for ROBINSON CRUSOE, with an account of his experiences). This is the edition Defoe would have read before wirting his novel, the first in English, in 1719. Rogers was a pirate and having rescued Selkirk went on to attack Spanish shipping on the west coast of South America and Mexico, succeeding in taking the Acapulco galleon in 1709, as well as other prizes. The expedition went as far north as California, and put into various ports in South America. The maps show the voyagers' track around the world and the South Sea coast of America from the island of Chiloe to Acapulco, in four parts. An important narrative and one of the best known British buccaneering stories.