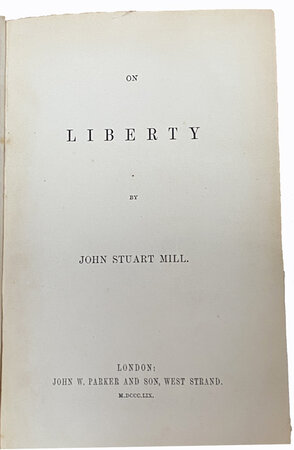 < >
An Argument for Freedom That Has "Never Been Improved Upon", with a letter from Mill to the Scottish surgeon James Syme

First edition. Pp. 207, plus the often missing 16 pp of original ads bound in at the rear. 8vo, original rippled cloth with blind-stamped border and spine lettered in gilt. Rather worn as usual but a good copy.

The copy of James Syme (1799-1870), the pioneering Edinburgh surgeon who also invented waterproof mackintosh material and became Joseph Lister’s father-in-law with his ownership inscription and letter to him from J.S. Mill pasted to the front free endpaper. ‘Mr J. S. Mill Presents his compliments to Mr Syme and if Mr Syme is disposed to join in the enclosed representation to the Council of the Horticultural Society and has not already signed another copy, requests the favour of his signing and returning it either to the undermentioned address or to Professor Babington, Cambridge. Many of the most distinguished botanists have either given or promised their signature. Blackheath Park, Kent April 7. 1864.’ Mill, like Syme, was an enthusiastic botanist all his life and a frequent contributor to the Phytologist. This letter was probably written about a petition in response to the Horticultural Society’s controversial botanical competition which aroused in many, and probably Mill, a concern for the need for botanical conservation in Britain. Competitors were required to submit a set of pressed plants collected from a single British county which provoked an angry response by professional and amateur botanists, probably referred to here by Mill,as it would encourage the extirpation of rare taxa. In the end a compromise was reached whereby the collection of rare plants was discouraged.
On Liberty was originally intended to be a short essay, but as the ideas developed, it was expanded, rewritten and ‘sedulously’ corrected by Mill and his wife, Harriet (who was instrumental in changing many of his beliefs on moral life and women's rights). Mill states in his Autobiography that On Liberty ‘was more directly and literally our joint production than anything else which bears my name.’ The final draft was nearly complete when his wife died suddenly in 1858. The book has been hugely influential since it was published although it did not go without criticism at the time. Some attacked it for its apparent discontinuity with utilitarianism, while others criticized it for its vagueness. Despite these carpings, the ideas presented in On Liberty have remained the basis of much liberal political thought, right up until the present and the book has remained continuously in print since its initial publication. ‘On Liberty’ remains his most widely read book. It represents the final stage in the growth of Utilitarian doctrine, and its central point is one which had escaped both Mill's father and Bentham. Mill realized that the 'greatest good' of the community is inseparable from the liberty of the individual. Hitherto, liberty had always been considered relative, in relation to tyranny or oppression: Mill extended tyranny to include a custom-ridden majority, and declared that 'the sole end for which mankind is justified in interfering with liberty of action is self-protection'. Many of Mill's ideas are now the common-place of democracy. His arguments for freedom of every kind of thought or speech have never been improved upon.’ [PMM 345).