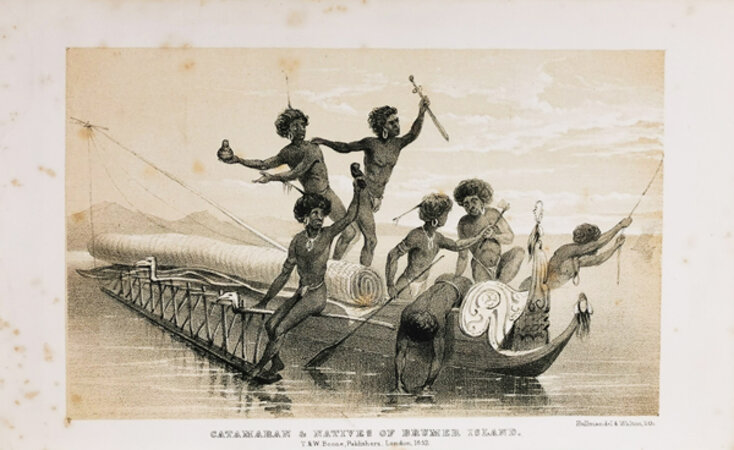 MACGILLIVRAY, John. ~ Narrative of the Voyage of H.M.S. Rattlesnake, commanded by the late Captain Owen Stanley, R.N., F.R.S. &c. during the Years 1846-1850. Including Discoveries and Surveys in New Guinea, the Louisiade Archipelago, etc. To which is added the account of Mr. E.B. Kennedy's Expedition for the Exploration of the Cape York Peninsula.

"A very important voyage of exploration and scientific research" (Ferguson).. This, the official account, records the Rattlesnake's four year voyage, during which she made brief visits to, amongst other places, Rio de Janeiro, Mauritius, Port Stanley, Hobart Town, Sydney, Melbourne and New Zealand. The fine lithograph plates were taken from drawings by the noted naturalist T.H. Huxley who acted as assistant-surgeon on the Rattlesnake, but whose work mainly concentrated on marine specimens.
The son of the noted naturalist William MacGillivray, "John served as naturalist on various government surveying expeditions from 1842 to 1855, including that of chief naturalist on the Rattlesnake. After the latter date, he continued to study the natural sciences in the Australasian Islands" (Hill).