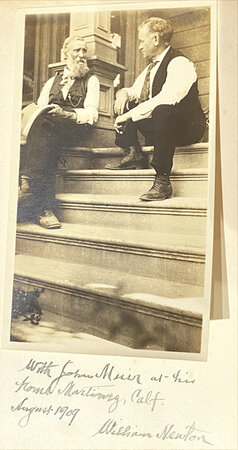 < >
With a photograph of John Muir and William Newton, the book was later given to Harry Lauder, the great Scottish entertainer

An original black and white photograph of John Muir and William Newton is tipped onto the front free endpaper. They are seated on the steps of a substantial house, the bearded Muir with dusty shoes and a wide-brimmed hat, below which is the ink inscription ‘With John Muir at his home....Calif. August 1909. William Newton.’ On the front pastedown is an ink inscription to Scottish entertainer ‘Sir Harry Lauder whom we met in Manila in 1925. Wm. Newton, Fairacres, Omaha, Nebr. Jun 17, 1927’.
John Muir, the great advocate of wilderness conservation in California was born in Dunbar in Scotland. His campaigning helped save the Yosemite Valley, Sequoia National Park and other wilderness areas. He was the founder of the Sierra Club, now one of the most important conservation organisations in the USA.
His relationship with William Newton stretched back to when Newton was a child and he visited him with his father and mother who were friends of Muir. At the University of the Pacific Library is correspondence between Muir and Newton preceding and after the visit when this picture was taken.
Harry Lauder was the famous Scottish singer and entertainer who Churchill described as ‘Scotland’s greatest ever ambassador’.