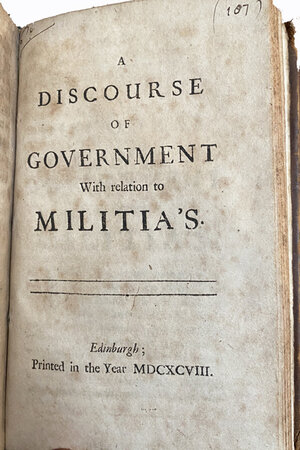 FLETCHER, Andrew of Saltoun. ~ A Discourse of Government with Relation of Militia’s.

Pp. 66. First edition. Edinburgh, 1698.
Bound together with:
1. [SETON, William]. The Interest of Scotland in Three Essays viz. I. Of the true Original and Indifferency of Church-Government. II. Of the Union of Scotland and England into one Monarchy. III. Of the Present State of Scotland.
Pp. viii, 114. Printed in the Year 1700.
2. ANON. A Discourse Upon the Uniting Scotland with England.
Pp.ii,92. London, printed for James Knapton, 1702.
3. ASGILL, John. An Essay on a Registry for Titles of Lands by John Asgill of Lincoln’s Inn.
Pp. iv, 43. London, printed by John Attwood. 1698.

All bound in contemporary calf with ‘Misc. R.’ on the spine label in gilt and with the booklabel of Thomas Foley of Great Witley Court in Worcester.
In his ‘Discourse of Government relating to Militias’ Fletcher argued that the Royal Army in Scotland should be replaced by local militias – aposition of republican virtue which was to return a half-century later and foreshadowed the thinking of Adam Ferguson in lauding martial virtues over commercially minded polite society which he thought unmanly. Fletcher’s other two important works were:’ Two Discourses concerning the Affairs of Scotland’ (1698), in which he discussed the problems of Scottish trade and economics; and ‘An Account of a Conversation concerning a right regulation of Governments for the common good of Mankind’ (1703).