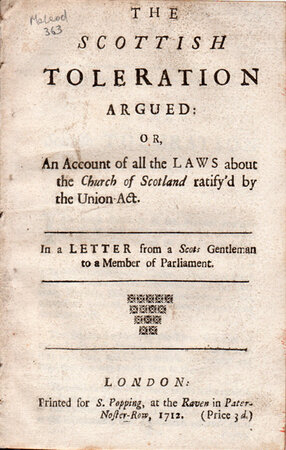 [CARSTARES, William]. ~ The Scottish toleration argued: or, an account of all the laws about the Church of Scotland ratify'd by the Union Act. In a letter from a Scots gentleman to a member of Parliament

London printed for S. Popping at the Raven in Paternoster Row 1712

32pp. 8vo., unbound. Very slightly soiled on the outside but generally very good.

Although Carstares was a strong and pivotal supporter of the Act of Union, and the Hanoverian succession, as this pamphlet shows, he was alarmed by intereference with Scottish religious affairs by the Parliament in London. He pointed to the ways in which a bill to give Scottish Episcopalians greater freedom would disrupt and threaten the security of the Church of Scotland and of the state as well. It was the chief object of his policy at this time to prevent Lord Oxford from strenghtening the Episcopalian Jacobites, especially two bills, one of which extended their privileges and the other which would have placed in the hands of old patrons the right of patronage which the Revolution Settlement had put in the hands of the elders and the Protestants.