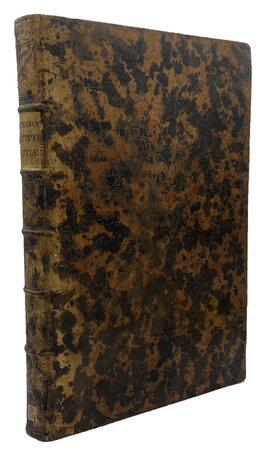 Second edition. With his important work ‘De iure regni apud Scotos dialogus’ added at the rear. Folio, in near contemporary full mottled calf, with manuscript spine and shelf mark labels on the spine, unfinished pastedowns with some rubbing and wear but generally a very good, clean and unsophisticated copy. “Edinburgh, Alexander Arbuthnet” 1583.

The”Law of Government Among the Scots” was first published in 1582 - so this is a very early printing. The following year it was condemned and outlawed by the Scottish Parliament. Although the imprint of the work is Edinburgh, this edition was in fact printed in Antwerp.
With the booklabel of the Marquis of Tweeddale.
Buchanan (1506-82) was a poet, author, Latin scholar, politician and teacher of Mary, Queen of Scots and King James VI. He studied at the Universities of Paris and St. Andrews. Buchanan became a tutor to a son of King James V, however, he was denounced as a heretic following a work he wrote about Cardinal Beaton and was forced to flee to France, where he taught the essayist Michel de Montaigne, and then Portugal, where he became highly regarded as a poet. He returned to Scotland in 1561 to become tutor to Mary, Queen of Scots (1542-87).
In 1566, Buchanan was appointed as Principal of St Leonard's College in St Andrews and Poet Laureate. Buchanan was an early supporter of the Reformation, joining Knox's General Assembly of the Church of Scotland. His support for the Protestant cause and his distaste at the murder of Mary's second husband, Lord Darnley, turned Buchanan into a bitter enemy of his Queen and he took part in her prosecution for treason. He became Moderator of the General Assembly in 1567, the only layman ever to hold this office. In 1570, the Earl of Moray appointed Buchanan tutor to the James VI a position he held until 1578. His teaching included stern lessons in Buchanan's views on kingship and poisoning James against his mother. However, Buchanan was later to hold high political office under James. He wrote several works, all in Latin, including the notorious De Maria Scotorum Regina (1571), in which he levelled various charges against Mary, De jure regni apud Scotos (1579), which supported James' rule and this history of Scotland Rerum scoticarum historia (1582).