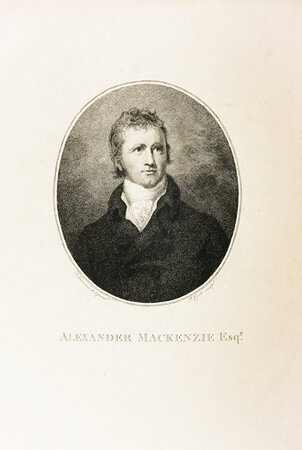 < >
The first overland expedition to reach the Pacific north of Mexico across North America.

MACKENZIE, Alexander. ~ Voyages from Montreal, on the River St. Laurence, through the Continent of North America, to the Frozen and Pacific Oceans; In the Years 1789 and 1793. With a preliminary Account of the Rise, Progress and Present State of the Fur Trade of that Country.

In 1789, Mackenzie's crew which included French-Canadian voyagers, his wife and several others, paddled off in a birchbark canoe from Fort Chipewyan in Central Canada. Other canoes, navigated by Indian hunters and interpreters, followed behind. Over 100 days later, however, Mackenzie's entourage arrived back at the fort with details of another route to the Arctic Ocean, not the elusive Pacific.
Although this first trip aided in mapping the northern regions of the continent, Mackenzie remained determined to find the ‘Western Sea’. Therefore on May 9 1793, Mackenzie, with nine others, packed into a 25 foot canoe at Fort Fork along the Peace River for a second voyage. This time, he succeeded, and announced his arrival on a rock near Bella Coola near the Pacific by painting the following words with a vermillion and grease mixture: ‘Alexander Mackenzie from Canada, by land, the twenty-second of July, one thousand seven hundred and ninety-three’.