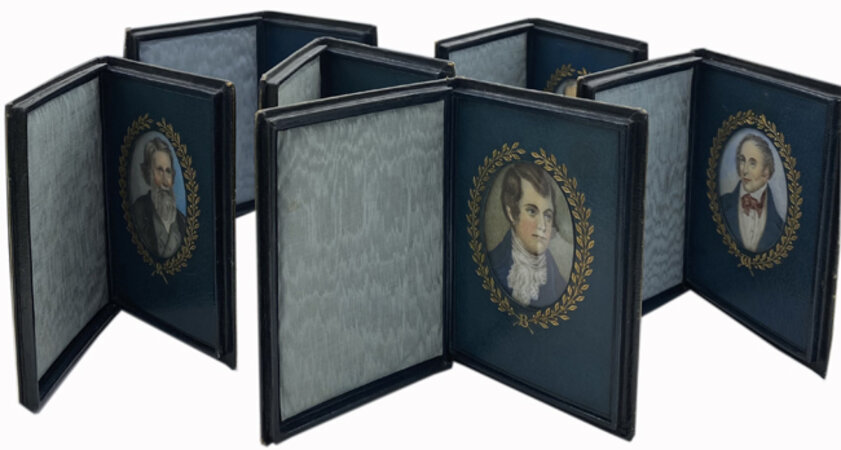 Six miniature watercolour oval portraits of Burns, Wordsworth, Longfellow, Ruskin, Whittier and Francis Bacon each set in a handsome matching morocco case (15 x 10.5 cms) apparently by Riviere of dark blue straight grain morocco with gilt ruling to spine and edges with the portrait set behind glass in a setting of blue morocco with a gilt laurel wreath tooled around the oval and the initial of the poet at the base, blue watered silk doublures. An exquisite set. Very slight occasional rubbing to extremities.

Made for the London carriage trade and most probably sold through Sotherans, Hatchards or Bumpus who were the main conduits of these types of binding. Having been unable to find any other record or mention of such morocco cased portraits of poets, writers or other important figures, it must be assumed that this was a particular commission, probably as a gift with the recipients favourite poets represented which would explain the rather eclectic mix of poets. Today we would wonder about the inclusion of Longfellow and Whittier but Longfellow was very popular at this time and the American poet John Greenleaf Whittier, very influenced by Burns was,like Longfellow, a ‘Schoolroom Poet’ and is particularly interesting now because of his connection with anti-slavery poetry.
A very attractive and pleasing set.