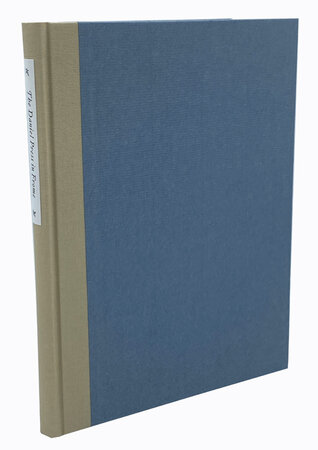 < >
The cradle of Henry Daniel’s press

A far deeper coverage of the less known output of the Daniel family at their domestic press at their home in Frome, Somerset. The domestic press dates from Henry’s early years but it was picked up by two of his brothers, Eustace and William, while he was away at school and then studying in London and Oxford. After Henry had left home and established himself and his press at Worcester College, Oxford, the brothers and their clergyman father continued printing small items. Some were clearly juvenile and rather amateur works - much of it was ephemeral material for use in running the church which are as good as unknown and almost never seen. There were also over 50 bookplates for family and friends.
Ould writes that: ‘this title...provides insights not only into the early work of a formative private press but also the role of an amateur press in its social setting...David Chambers and I tracked down, examined, and catalogued seven substantial collections of the Frome output amounting to over 1000 pieces...moreover we found more than 100 items not catalogued by Madan and these we have of course meticulously listed.