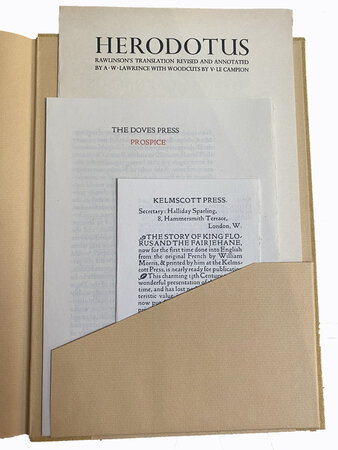 < >
The pleasures of private press prospectuses

One of 350 copies. 21 plates, 7 illustrations in the text and 3 facsimile prospectuses for publications by the Kelmscott, Doves and Nonesuch Presses housed in the rear pocket. Set in Poliphilus type and printed on Zerkall mould-made paper. The plates were printed by Premiere Press. Pp. xii,147. Folio, bound by The Fine Bindery in half yellow cloth, patterned paper sides, lettering in gilt to spine, housed in the original slipcase. A very good copy.

As David Butcher notes in his introduction, prospectuses and catalogues issued by private presses are beautiful examples of the work of the presses as well as offering clues to the development of the titles they promote. As he says, this book ‘might well be called ‘the pleasures of private press prospectuses’. He looks at all the great British presses from Kelmscott and goes through the post-war era to the present day.