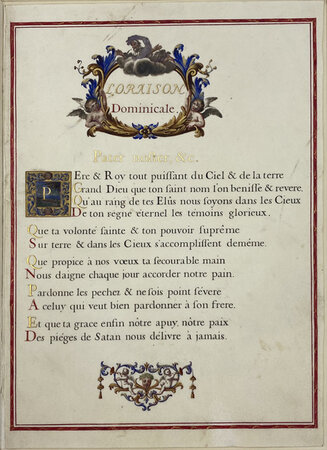 Illuminated manuscript on recto only of a single vellum leaf (195 x 271 mm) written out by Gilles Rousselet in black, red and gold ink, title in a cartouche, historiated initial P, initials in red outlined gilt and red and a tailpiece in gold and colours, all within a ruled red and gilt border.
Mounted and bound by Riviere and Son as a folio in full dark blue goatskin, with gilt double fillet border, spine in compartments with gilt fillets, gilt lettering, turn-ins tooled with gilt rolls, marbled endpapers, all edges gilt. Housed in a half red morocco chemise with marbled paper sides, lined in felt.

A remarkable and exquisite manuscript of The Lord’s Prayer by the great French calligrapher Gilles Rousselet (1610-1686). He worked as calligrapher, engraver and printer-publisher at the Imprimerie Royale from 1642 to 1648 and as Graveur du Roi he reproduced 14 of the great Masters in the Royal collection. He was one of the most skilled engravers and calligraphers of the 17th century.
With the booklabel of Mortimer Schiff. Sold at Sotheby, 8th December 1938 as lot 2073 for 15 shillings to Rham.