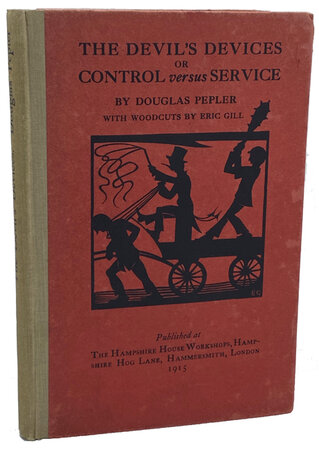 < >
Inscribed with an additional als from Pepler to Green-Armytage

6 wood cuts and 5 triangular devices by Eric Gill. Copy no.10 (x) of 200 numbered “proof” copies, inscribed and signed by Douglas Pepler. 12mo., original quarter smooth canvas with red paper covered pictorial boards, with Dumb Driven Cattle by Gill on the upper cover, a little rubbing to extremities and darkening to spine, otherwise a good and bright copy of this early Gill work and collaboration with Pepler.

Seen as the precursor to the S. Dominic’s Press with its early Gill engraving and close collaboration between Gill and Pepler. This copy is inscribed by Pepler for R.N. Green Armytage, a friend of the Guild members at Ditchling: “We gave up this game as too proud. Douglas Pepler”. Pepler has also written a personal note to Green Armytage which is tipped in, dated from Ditchling, 26. VI. 19 and with the Guild mark in ink. He writes about The Game magazine and some beautiful verses received from Fr John which just missed going into the first edition of The Game. Also tipped in is a page monogrammed and dated 1955 by an owner of the book Stanley Scott who explains that The Game in the letter is the magazine produced at St Dominic’s Press and ‘the game’ in the inscription is that of signing copies of the book.
At the time this book was published, Pepler worked for the London County Council and was the organiser of the first school meals service in London. The Devil’s Devices, a sociological satire, reflect his social concerns at the time and reflects on wealth and capitalism with some very interesting use of page design and printing.
Printed at the Westminster Press, 441a Harrow Road, just down from our current shop.