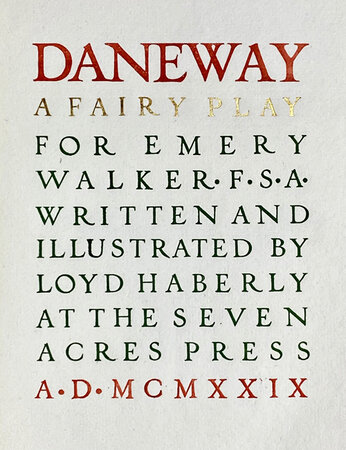 < >
The rarest of Seven Acres Press books made for Emery Walker, inscribed by Haberly and with a personalised binding ‘With Hab’s Love I go’

Written, illustrated, printed and bound by Loyd Haberly at The Seven Acres Press. No. 26 of 60 copies. First and only edition. 6 woodcuts by Haberly including one of Daneway House. Printed in red, green, gold, blue and black. 8vo., full brown morocco, decorated with blind stamps and with the initials E.C.T. and N.C.T. in gilt on the front and rear covers. The inner top margins (front and back) has the inscription blocked in gilt “FOR NORAH AND JOE/WITH HAB’S LOVE I GO”, top and fore edges gilt. Inscribed in ink on last blank “Loyd Haberly, 12 November ‘29”. Darkening and marking to the binding, usual offset from the turnins, otherwise very good and clean internally.

Haberly was an American who learnt his book making skills at the Central School of Arts and Crafts while on a Rhodes Scholarship to study law at Oxford. Emery Walker, the backbone of the Private Press movement, having played a vital part in most of the early great presses, was a great influence on Haberly. Haberly’s second book at the Seven Acres Press, Cymberina, caught Walker’s attention and he took pains to coach the budding printer on teh finer points of printing and convinced him of the beauty of Caslon types.
Walker owned the house Daneway, and Haberly wrote this masque to be performed on its lawn. Haberly later briefly went to run the Gregynog Press, although his tenure there was not a success. This is one of the scarcest titles from The Seven Acres Press. Haberly himself tells the story that when Emery Walker’s friend, the Prime Minister Ramsay Macdonald, got his copy of this book...”he wrote to me from Chequers, saying he could not let an American outdo a Scot in honouring a great Englishman. So Emery Walker was knighted as Sir Emery Walker in the next Honours List’.
Daneway House in Gloucestershire had been important in the Arts and Crafts movement immediately prior to Emery Walker’s tenancy having been lent to the furniture designers Ernest Gimson and the Barnsley Brothers who set up the Daneway Workshops. Walker had the house as a country retreat between 1922 and his death in 1933.