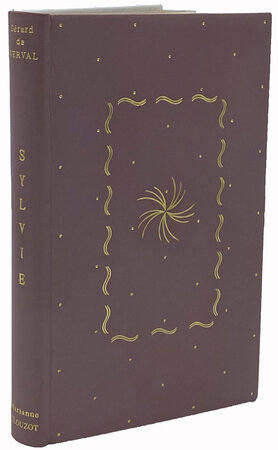 No. 550 of 750 copies. 20 original etchings by Marianne Clouzot with several wood cuts throughout the text by Gerard Angiolini. Thin 8vo., original rose calf binding by René Desmules dated 1972 with delicate dots and wave patterns with a catherine wheel-like device in the centre of each side all in gilt, spine lettered in gilt, white calf turnins and maroon suede doublures, all edges gilt, original wrappers bound in, housed in the original matching chemise and slipcase. In superb condition.

Semi-autobiographical, Nerval’s story is of three lost loves. Proust style (in fact Proust was a great fan of the book), a paragraph in the newspaper causes the narrator to revisit his youth. The noble youth decides to leave his debauched life in Paris and return to the pure love of a peasant girl Sylvie...a timeless theme of the search for a purer time. He also loves a seductive actress in Paris and a beautiful noblewoman who dies in a convent. He loves all of them but there is no happy ending.
René Desmules was a superb French binder, it is well known that he executed many of Paul Bonet’s binding designs.