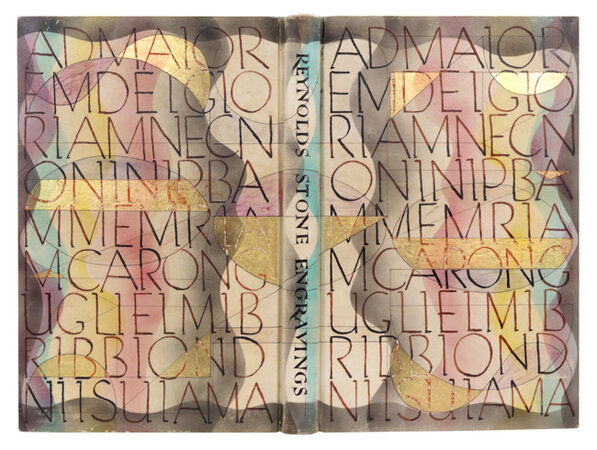 With an appreciation by Kenneth Clark. 151 pages bearing hundreds of Stone engravings. First edition. Printed on Basingwerk parchment. 4to., bound by Garth While in full vellum over boards handpainted and beautifully lettered on both boards in gilt, black, pink, yellow, blue and purple with a Latin text including the Jesuit motto ‘Ad maiorem Dei gloriam’, all edges gilt. Bound in the 1980s.

Garth While trained in bookbinding under De Coverley at Morley College and studied calligraphy with Dorothy Mahoney, a student and assistant of the great Edward Johnston, at the Stanhope Institute. During his bookbinding career, While specialised in hand-painted vellum bindings. While is now a silversmith whose work can be found in the Victoria and Albert Museum.
Although unsigned this binding is by Garth While and was acquired with fifteen others by an American collector in London in 2008.