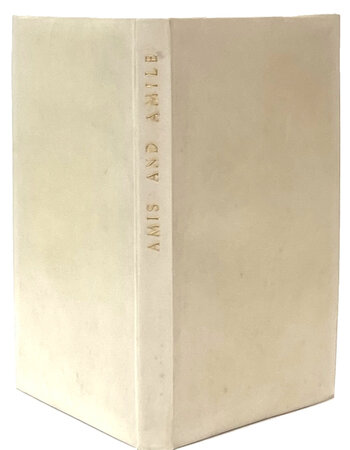 KELMSCOTT PRESS. ~ Of the Friendship of Amis and Amile.

One of 500 copies. With woodcut title and borders and decorated initials throughout by William Morris. Printed in Chaucer type in red and black. 16mo., bound later by Sangorski & Sutcliffe of London, with their stamp, in full vellum, yapp edges. An extremely good, crisp and fresh copy.

An Old French romance which inspired Morris, not only did he do the translation for this book but he also wrote a famous poem based on the story Amys & Amillion. Amis and Amile were two medieval knights who were devoted friends and this is the story of their friendship which led Amile to slay his own children for the sake of his friend. Of course this supreme sacrifice meant that the children were not dead after all. Eventually the two knights were killed in the same battle and a miracle was added to the end of the story as, although they were buried apart from each other, the two coffins were found side by side the next morning. Classic Morris fare.