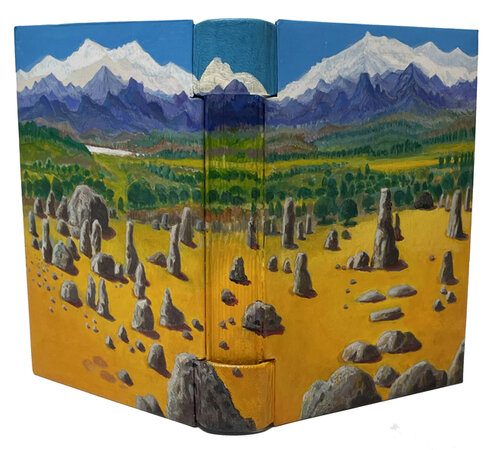 < >
Written, illustrated and bound by the great Philip Smith

PHILIP SMITH, designer bookbinder. ~ Non-Duality, As It Is. As seen by Philip Smith.

Written out in this form at Yatton Keynell October 2006.

13 pages of printed philosophical text by Philip Smith with 19 postcards of works by Philip Smith bound in interleaved by plain paper. Sm. 8vo., yoke-backed binding sewn on three linen tapes with a symbolic landscape painted across both boards on Langley handmade paper and over a ground of Japanese paper on the spine in acrylics by Smith, four endpaper sheets in yellow, blue and brown Mi-Tients Canson paper. Housed in the original blue cloth, felt lined box with printed paper spine label.

Philip Smith was one of the greatest British bookbinders of the 20th century and was well-known for inventing several techniques including the ‘lap-back’ structure which allows the book to open fully and so an image or configuration can be created across both boards. He also invented vellum/laminated yokes which can also be seen here which reinforces the joints and allows for full opening.
The philosophy of Non-Duality was the driving force behind Philip’s work - that there is only One Consciousness and that everything is Consciousness without which we would not be alive and all our perceptions, inspirations and ideas arise in consciousness. The text of this book is his exploration of his theory as is the binding and the other bindings which are pictured in this book.