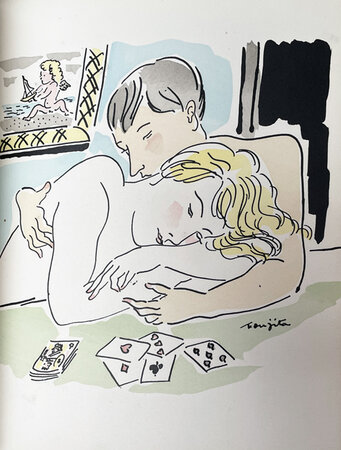 < >
With an original drawing by Foujita

One of only 30 copies on Hollande Van Gelder paper with an original drawing signed by the artist on one poem title page and an extra suite of coloured engravings. 9 coloured engraved plates by Foujita and an extra suite of 10 engravings, in addition 20 culs-de-lampe small cherubs appear throughout (five on them being put together on a single plate as the 10th engraving of the extra suite). Sm. 4to., bound in half green morocco with marbled paper covered boards, spine lettered with a quiver decoration in gilt, the extra suite has been bound in next to each original matching plate and the original wrappers are bound in, marbled endpapers. Spine faded with some rubbing to the boards and shelf-wear to bottom edge, otherwise a very good copy.

Foujita was a notable Japanese-French painter and printmaker born in Tokyo who, on moving to France, became friends with Picasso, Gris, Modigliani and Matisse. He was feted and very much part of the artistic scene in Paris. He was particularly sought after for his superb ability to combine Japanese art with the European tradition.