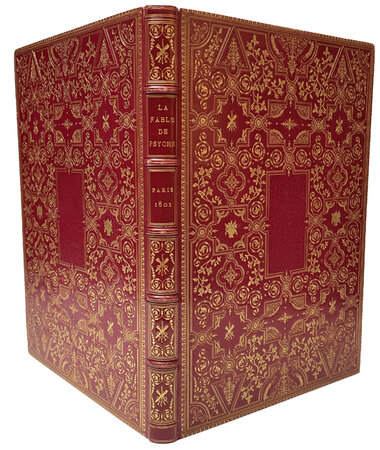 Engraved frontispiece and 32 plates after Raphael by Dubois and Marchais under the direction of Girodet. Folio (341 x 238 x 30 mm), bound c.1890 by R. Petit (signed in gilt on front turn-in) and tooled by J. Le Comte (signed in gilt on rear turn-in) in red morocco, covers tooled in gilt to an elaborate fanfare design with connecting compartments of fillets and gouges, containing a basket of flowers, a quiver and bow and fleurons with fronds and sprigs, the central compartment left empty, surrounded by leafy stems and scrolls. The spine is divided into six panels with raised bands, lettered in the second and third, the others with a quiver and bow, scrolls and sprigs, the edges of the boards tooled with a gilt double fillet, the turn-ins and matching inside joints with gilt rolls, green watered silk endleaves, gilt edges. Some foxing or spotting. In a later clamshell box.

A grandly printed and illustrated edition. The binding is suitably splendid and is signed by both Petit and Le Comte. Flety notes that there were plenty of binders named Petit working in Paris in the 19th century. Remy had an atelier at 2 rue Saint-Thomas-d’Aquin in 1900. A binder named Le Comte was at 41 rue de Bourgogne at the end of the century.
Two bookplates, one belonging to Anthony Cefaratti.