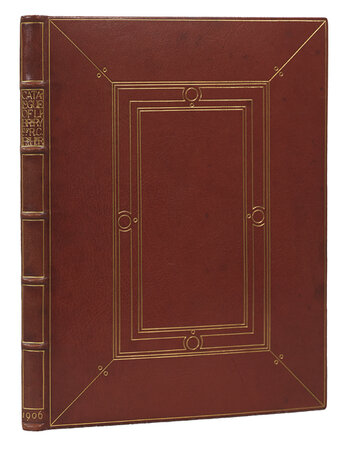 < >
Catalogue for a prospective auction of the library of T.J. Cobden-Sanderson’s brother in law - apparently specially bound for him at the Doves Bindery and later belonging to Sydney Cockerell

DOVES BINDERY. FISHER, [Richard &] R.C. ~ Catalogue of the Valuable and Interesting Library of R.C. Fisher, Esq. (of Hill-Top, Midhurst, Sussex) consisting chiefly of early and extremely rare Italian, German and French woodcut books, including a fine series of Books of Hours and a few fine bindings. Which will be sold by...Messrs Sotheby, Wilkinson & Hodge...on Monday, the 21st of May, 1906 and Three following days.

6 chromolithogrpahic plates of 16th and 17th century bookbindings by W. Griggs (occasional very light spotting). Quarto (182 x 247 mm), bound at the Doves Bindery to a design by C.J. Cobden-Sanderson in 1908 (signed in gilt on the lower turn-in), full reddish brown niger, gold-tooled panelled sides with two sets of triple gilt fillets and open circles, interlocking on all sides, spine in compartments with raised bands, each compartment panelled with gilt, the second panel with excellent gilt lettering, triple gilt fillets to turn-ins, edges gilt and gauffered. Housed in a later clamshell, felt-lined cloth box. A few spots to the sides and the usual offset from the turn-ins to the feps but otherwise a very handsome Doves binding.

T.J. Cobden-Sanderson’s brother in law, R.C. Fisher, had inherited and added to his father Richard Fisher’s extraordinary and extensive collection of early illustrated books - all the greats are represented here. The catalogue was carefully prepared and extravagantly illustrated, however the auction never took place as it was bought en bloc in advance by C.W. Dyson Perrins.
It would seem sensible to assume that this book was bound specially for Fisher, however it may well have been owned later by S.C. Cockerell as there is a note in his hand on a cutting of a Times article dated 26 February 1906 advertising the sale.