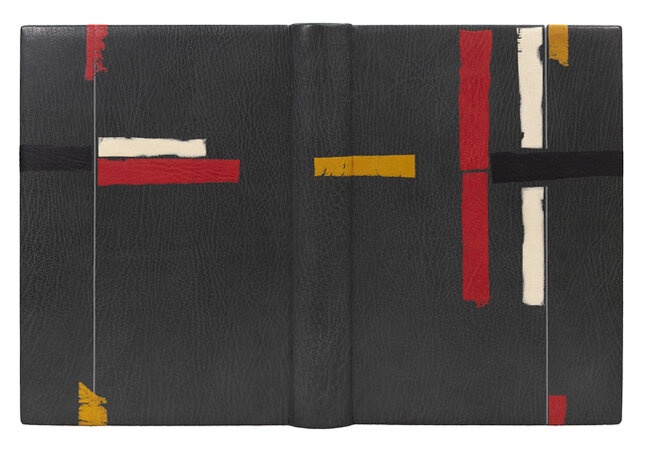 London Printed at the Stamperia Valdonega for The British Library 1994

Photographic portrait frontispiece of Dreyfus. Pp. x, 339. Large 8vo., specially bound by Jeff Clements for Anthony Dowd in 2003 as printed on the lower doublure. Bound in grey Harmatan goatskin with feathered onlays of black, red and yellow and natural white alum-tawed goatskin on both covers, six of the onlays traverse the edges onto the doublures, the yellow goatskin goes across the front cover and spine, single vertical grey line tooled on each which run down the doublures as well. Each doublure with an integral joint is of acid free blue Fabriano handmade ‘Roma’ laid paper divided into two making use of the deckle edges and between the Roma papers are original leaves from Cranach Press prospectuses, the endleaves are lined with blue suede sheepskin, edges coloured yellow. Housed in the original clam shell box of blue Irish buckram lined with felt, spine label titled in Palatino on Fabriano hand made paper.

A superb example of a Jeff Clements binding responding to the book in his way with the Cranach Press prospectus peeping through the doublures to reference Dreyfus’s essays on the Cranach Press in the book. Plus in his binding statetment (included with the book along with a tls from Clements to Dowd and the original invoice) Clements writes: “There is an allusion to the title, or perhaps a ‘play on words’. The horizontal directional form of the cover design leads around the front cover onto the doublure and so ‘into print’.”
The book is inscribed on the half title by John Dreyfus to Anthony Dowd: “at the end of our first meeting...6 Sept 97”.
Jeff Clements was born in 1934 in Plymouth, studying there before moving to the L.C.C. Central School of Art and Crafts. He taught at several colleges, later becoming head of the faculty of Art and Design at the University o fthe West of England. He was President of the Designer Bookbinders 1981 and 1983 and moved to live in Holland producing only a few bindings a year for personal expression and relaxation. His designs are very bold and sure with a strong appreciation of the dramatic use of colour. His bindings are in private and public collections all over the world with an extensive collection being held by the Keatley Trust and in the Anthony Dowd Collection of Modern Bindings kept at the John Rylands Library.