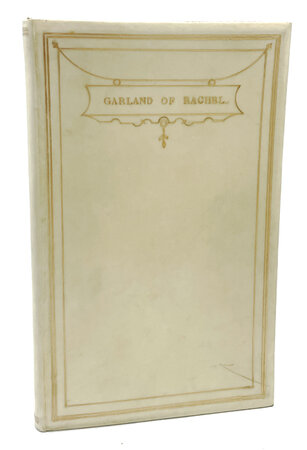 < >
One of only 36 copies, rubricated by Mrs. Daniel - this one of 18 contributor’s copies for T.H. Ward (husband of the author Mrs Humphry Ward) with Daniel’s original pamphlet presented to contributors

One of only 36 copies, 18 of which were for the contributors, this being the copy printed for Thomas Humphry Ward with his name printed on the title page, and an inscription by him on the first blank. Printed in Fell type with rubricated initials by Mrs. Daniel. 8vo., bound, probably by Morley of Oxford, in full vellum with three gilt fillets and title design in the fomr of a hanging banner in gilt on the upper cover, spine and turn-ins ruled in gilt with marbled endpapers. Small scratch on upper cover and very mild bowing. Housed with the original 8pp. introductory pamphlet printed to go with the contributor’s presentation copies and a later Oxford University Press exhibition card in a later full black morocco slipcase.

Extremely rare as only thirty-six copies of the book were printed. Eighteen copies were bound for the contributing poets with individual title pages and seventeen were issued at various times in various bindings. The last copy, in sheets, was given to Thomas B. Mosher of Maine in December 1901. It was from this copy that Mosher reprinted The Garland in the United States in 1902.
Probably the most important of all Daniel Press publications, the Garland of Rachel provides “The first adequate specimen of the Fell type...” The collection of 18 poems was authored by Dr. Daniel and seventeen of his Oxford friends in honour of his daughter Rachel’s first birthday. The contributors included several of the most important literary figures of the day including Lewis Caroll, Edmund Gosse, Austin Dobson, Andrew Lang, J. A. Symonds, Robert Bridges, Albert Watson, A. Mary F. Robinson, Sir Richard Harington, W.E. Henley, William Courthope, Frederick Locker {Lampson], T.H. Ward, Ernest Myers, Margaret L. Woods and C.J.Crutwell.

T.H. Ward, who was the contributing recipient of this copy, was an author and journalist and close friend of the Daniels in Oxford who is perhaps most well known for being the husband of the best-selling author Mary Augusta Ward who wrote under the name Mrs Humphry Ward. This is perhaps the key copy of the book in that, as Madan points out it was Ward who had made the suggestion to Daniel that the first birthday of his daughter deserved to be celebrated with special poems by his friends to be printed at the Daniel Press.