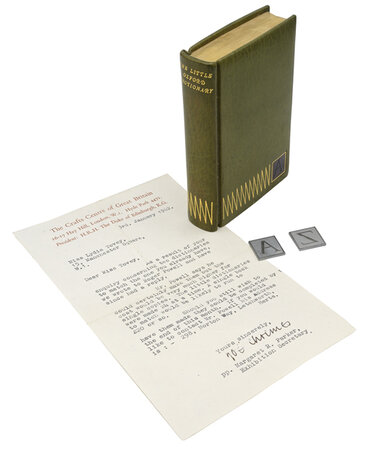 < >
Bound by Roger Powell with the original blocks for the letters

Third edition. Pp. 640. 12mo., [85 x 120mm], bound by Roger Powell in 1962 in full olive green goatskin, covers tooled in gilt zig-zag lines at the foot running all the way around the binding with the letter A blind-tooled on a small purple goatskin label on the front and the letter Z similarly blind-tooled on a teal goatskin label on the back, both with gilt fillets, spine lettered in gilt, plain endpapers, all edges gilt. In immaculate condition.

Together with the two original metal blocks used to blind-tool the letters A and Z.
The binding is unsigned but comes with a letter from The Craft Centre of Great Britain addressed to Miss Lydia Tovey and dated 3rd January 1962 in response to her request for two dictionaries to match one already bound by Powell. The letter suggests she contact him directly at 198 Norton Way, Letchworth Herts, which may have caused some delay as this was in fact Sandy Cockerell’s address. Clearly Powell accepted the commission.
Roger Powell was born in 1896 and began binding seriously in 1930 when he studied for a year at the LCC Central School of Arts and Crafts under Douglas Cockerell, Peter McLeish, George Frewin and William Matthews. After a short period binding on his own, in 1935 he joined Douglas Cockerell & Son and remained a partner with Sandy Cockerell until 1947 when he set up his own Slade Bindery. In 1956 he set up a partnership with Peter Waters who he had taught as the RCA and Peter’s wife Sheila provided them both with assistance. Waters left in 1971 for the Library of Congress conservation department. Powell died in 1990 and the A and Z blocks used on this binding were part of the contents of his bindery bought by George Bayntun.
The great Bernard Middleton said of him that he was simply “one of the most important and influential bookbinders of the last hundred years and, arguably, of any period”.