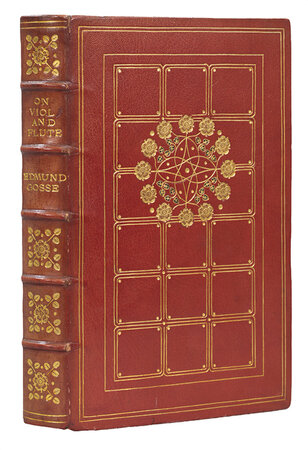 One of 50 large paper copies, signed by the printer Charles Whittingham. Photogravure frontispiece designed by Alma Tadema,RA and tailpiece designed by Hamo Thornycroft, RA, the sculptor and Gosse’s intimate friend. 8vo., bound by Alice Pattinson with her monogram on the lower turn-in, full reddish brown goatskin, each side with three four gilt fillers and a central pattern of 18 double gilt filleted round cornered squares with gilt dots in each corner, on the front is splendid circular design in gilt of interlocking stems, circles, dots, roses of gilt and pale morocco onlays and leaves with green morocco onlays, the spine in six panels with raised bands and gilt lettering in the two of the compartments, the others have gilt tooled rose and leaf motif, turn-ins with triple gilt fillets, top edge gilt, others uncut. Mild shelf-wear to lower edges, occasional rubbing to spine, a couple of tiny marks to upper board, otherwise an extremely good, handsome binding. Booksellers label of Heffers in Cambridge on front pastedown.

Alice Pattinson was a pupil of Douglas Cockerell and her bindings, particularly this one with its central rose and leaf pattern and choice of goatskin, show his influence. She was regularly praised for her work for instance in Art Workers Quarterly, Art Journal and The Art of the Book in 1914. In 1902, presumably after she completed this binding for the Guild of Handicraft Alice Pattinson set up a bindery with her partner Miss Hoffman, who did much of Pattinson’s forwarding and where the later to be great George Fisher was employed as a finisher.
The book itself is very interesting, being a collection of all the poems Edmund Gosse wrote which he considered worth preserving. This specially printed edition contains 33 poems from the original edition of 1873 and 36 poems from other collections published up to 1879.
On the verso of the front free endleaf a pencil note indicates this was exhibited in 1925 “Spring Gardens Gal[lery]. Panton Club. July 1925. Mrs Loosely. Book + binding A.P”