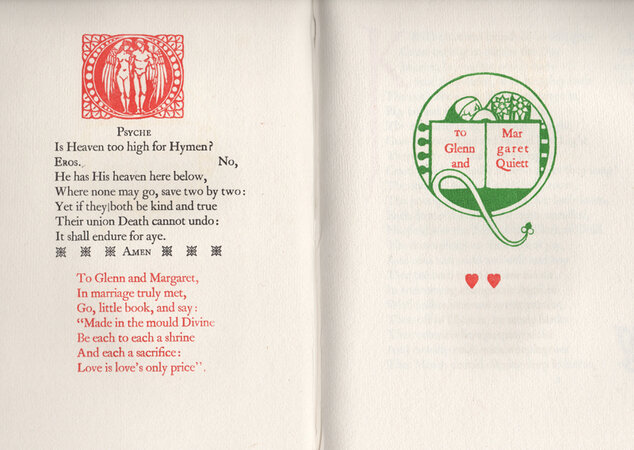 < >
One of 155 copies, written, printed, decorated by Loyd Haberly

HABERLY, Loyd. ~ The Copper Coloured Cupid or The Cutting of the Cake: The Second Book of Oregon’s Orpheus: Twelve Poems Made to Match as Many Months.

Illustrated with woodcuts and numerous decorative initials letters printed in red and green by the author, with hearts printed in red on every page. 8vo., in later vellum backed light blue boards printed in black on upper cover, exactly as the original 75 bound copies appeared. A remarkably bright, fresh and crisp unopened copy.

A thoughtful, attractive book produced by Haberly for the wedding of his friends Glenn and Margaret Quiett.
155 copies were printed but only 75 were bound. This copy is unnumbered and was sewn but not bound.