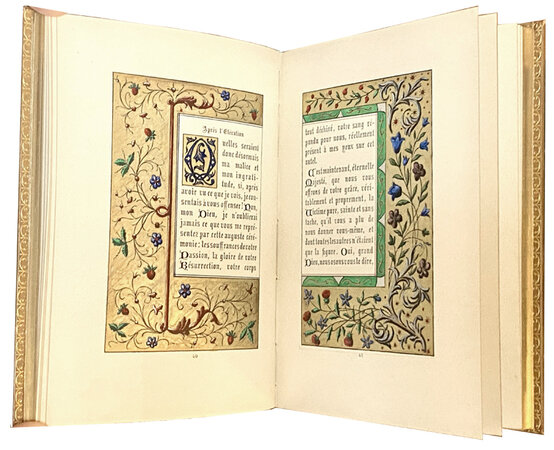 112 pages of well executed hand-illumination given as a gift for a first communion of Rita and Yvonne Lauranceau on 24 June, 1894. These ‘wedding books’ were sold with the text and borders of each page printed. Subsequently the plain, printed pages were all illuminated in colour including silver and gold by the owner or someone commissioned to do so by the owner in this case by Charles Defrance in 1883 according to a note on the verso of the title. Inserted loose is the illuminated first communion notice handpainted and written on vellum. Pp. viii, 107. 8vo., beautifully bound in full tan calf, both boards with borders of gilt tooled blue and red morocco and two further gilt tooled borders, spine in compartments with raised bands, gilt lettering in the second panel and the others with two gilt fillets and gold tooled design, turn-ins with elaborate gilt border, ivory silk endleaves, all edges gilt. Some rubbing to spine and corners but generally a handsome copy.

A lavish, execllently hand-illuminated book, usually prepared as a wedding gift but here clearly intended to be presented at the first communion of Rita and Yvonne Lauranceau in 1894. All we know about them is that their father, Andre Lauranceau, was a prefect in Northern France.
Also inserted loose in the book is a card for the pilgrimage to Lourdes dated in ink 29th August 1903.