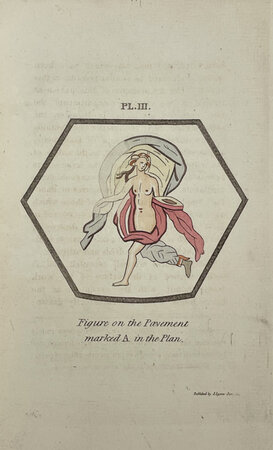 [LYSONS, Samuel.] ~ An Account of the Remains of A Roman Villa discovered at Bignor, in the County of Sussex, in the year 1811, and four following years.

Engraved folding frontispiece and six plates of aspects of the mosaic pavements, and including a folding plan of the villa engraved by H & E Weddell of Prospect Row, Walworth, after S. Lysons, all hand tinted. Pp. 37. 8vo., original grey/blue paper wrappers with title handwritten in ink on upper cover. Wrappers worn and chipped but intact, lower endpapers rather soiled, one plate loose but still a strong intact copy. Booklabel and blindstamp of The Charles Museum, Maidstone.

In 1811, the farmer George Tupper discovered the villa when his plough hit a large stone and it was subsequently excavated by John Hawkins of Bignor Park using the services of George Tupper and the antiquary Samuel Lysons. It was opened to the public and became a real tourist attraction. In 1818 Samuel Lysons read his third, and final paper to the Society of Antiquaries and in 1819 excavations ceased when he died.
Samuel Lysons was really the founding father of Romano-British archaeology and this posthumous publication sums up his findings at Bignor and puts it in context with other discoveries in England, Avenches in Switzerland and Pompeii.