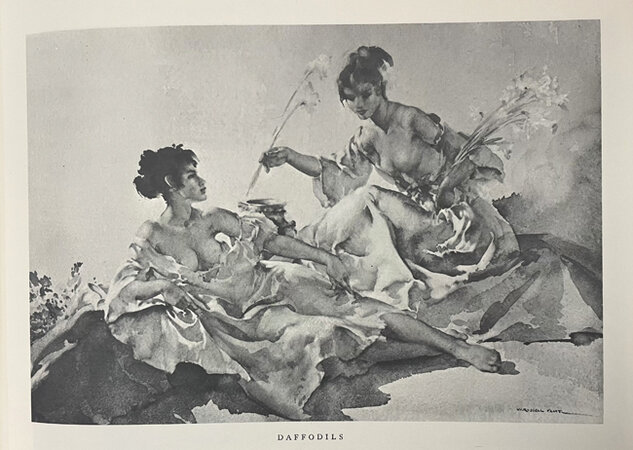 < >
One of the special copies in full leather

One of 150 special copies, this number 7, signed by the artist’s son. Double page title page in red, black and gold, 111 illustrations of work by Russell Flint, illustrations in text. Printed in black, blue and red in Caslon Old Face Roman and Italic by the Favil Press of Kensington. Illustrations printed by Chorley & Pickersgill of Leeds and an additional colour plate by Jayprint of Leicester. Folio, original full blue leather with Russell Flint figure blocked in gilt on the upper cover, spine lettered in gilt, in the blue cloth slipcase, all edges gilt. An extremely good copy with the prospectus and a letter from the Medici Society to the first buyer inserted loose.

Russell Flint put the book together before his death in 1969 and it was published posthumously by his son. A very charming and well illustrated autobiography including a great deal of useful information but written with wisdom and a lightness of touch.