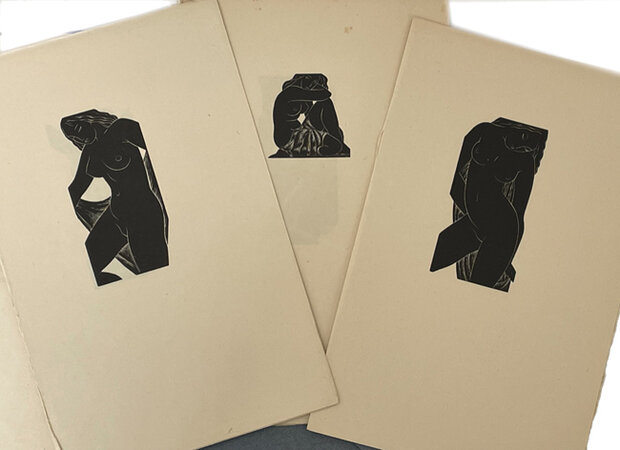 < >
Both the first and second editions with an additional suite of engravings of a very rare work by John Buckland Wright, with the two editions being limited to only 50 and 40 copies respectively

Complete copies of both editions with an additional suite of second edition silhouette engravings:
(a) First edition, being one of only 50 copies, this copy unusually signed in pencil by the artist opposit the colophon. 11 original wood engravings printed within in white line. Printed on japon. 17.3 x 25.5 x cms, in full dark blue morocco ruled in gilt, gilt lettering on spine, marbled endpapers, original front blue paper wrapper with printed label bound in. Very good.
(b) Second edition, being one of only 40 copies, this with an additional suite of 11 engravings. 11 original wood engravings from the original blocks which were further worked and cut away to produce silhouetted figures. 16.9 x 26 cms, blue cloth backed marbled paper covered boards, spine lettered in silver original blue paper wrappers with printed paper label on upper cover, untrimmed, with the original blue wrappers bound in - the additional suite being tucked into folded wrappers at the rear.

An astonishing collection of two different formats of this very rare early commission by John Buckland Wright. Dolores was privately printed in only 50 copies by A.A.M. Stols in Maastricht for Baron Emile van der Borch, and is very rarely seen on the market. It contained 11 white line wood engravings, each of the engravings being a female nude. Buckland Wright worked further on the blocks after this edition was published and hence there is a second edition in 40 copies in which the images appear as silhouettes - although one block, the image on p.11, was completely recut after the image was damaged. Here we have both versions plus an extra suite of silhouettes.
Baron van der Borch was a prominent patron and admirer of Buckland Wright and he began commissioning work from him after seeing his work for the JBW Editions Cupid’s Pastime which appeared much later in 1935. He comissioned Deux Poèmes and Dolores from him amongst several other items. Unfortunately the creative and sensitive young was shot by the Nazis whilst in his early twenties.