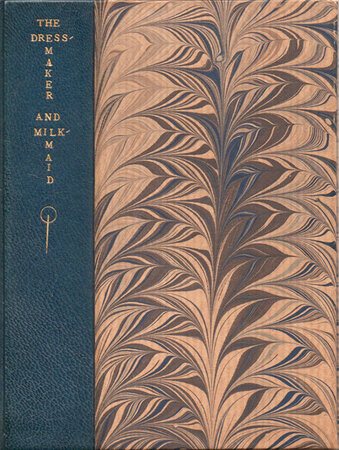 < >
Bound by the great Roger Powell

Two wood-engravings by Eric Gill: ‘Madonna knitting’ and a ball of wool. Pp. 8. 10 x 13.1, bound by master binder Roger Powell, signed and dated 1932 on the lower turn-in, in quarter rich blue morocco and Cockerell marbled paper covered board, spine lettered in gilt with a device on the front. Slight offset from the turn-in, otherwise a very charming, elegant binding.

Two verses by Pepler - both beginning “Our Lady was a....”
Roger Powell was born in 1896 and began binding seriously in 1930 when he studied for a year at the LCC Central School of Arts and Crafts under Douglas Cockerell, Peter McLeish, George Frewin and William Matthews. After a short period binding on his own, when this binding was completed, in 1935 he joined Douglas Cockerell & Son and remained a partner with Sandy Cockerell until 1947 when he set up his own Slade Bindery.
The great Bernard Middleton said of him that he was simply “one of the most important and influential bookbinders of the last hundred years and, arguably, of any period”.