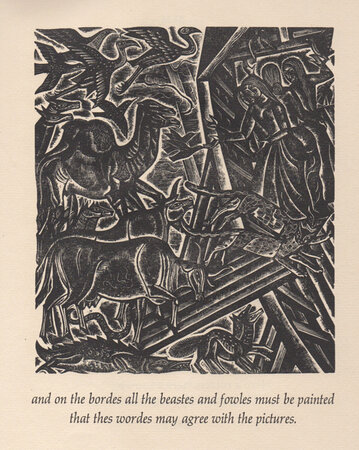 < >
The best printing of Jones’s remarkable engravings, this one of 80 specials with an extra loose set of engravings printed on japon

10 wood engravings by David Jones printed from the original blocks. No. XVI (16) of 80 special copies with a separate suite of all the engravings printed on japon. Printed on Barcham Green mould made paper by Will Carter at the Rampant Lions Press in Gill’s Golden Cockerel type, title page printed in red and black. Sm. folio, original quarter niger with marbled paper covered boards and a niger label on the upper cover lettered in gilt, extra set of engravings loose in the original cloth portfolio, both housed in the original cloth slipcase with printed paper label to spine. An extremely good set

Originally the ten engravings were going to include two printed offset, however while the text was being prepared, the missing two blocks were unearthed in Wales so all the engravings were printed from Jones’s original blocks.
The first printing of the blocks was in the Golden Cockerel Press edition of 1927. In this edition Robert Gibbings who did the printing was very disappointed by the results, blaming the inherent problems caused by Jones’s engraving of the blocks. Will Carter at the Rampant Lions Press does a far far better job and in this 1977 publication, the wood engravings are perfectly printed and David Jones’s engravings were finally seen in their full glory.