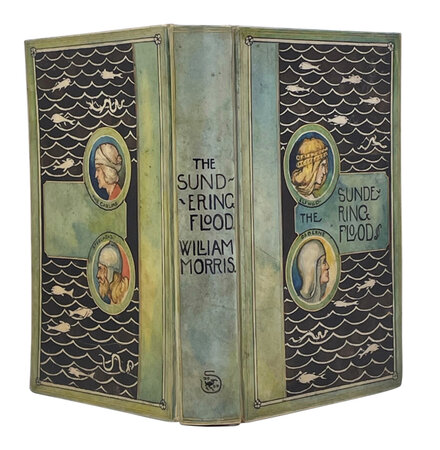 Dorothy “Dodo” Carlton Smyth (1880-1933), born in Glasgow, trained under Walter Crane at the Manchester School of Art between 1893 and 1897 and then went on to study at the Glasgow School of Art between 1898 and 1904 when she did this binding.
Cedric Chivers of Bath had patented his ‘vellucent’ binding method in 1898 which involved hand-painting on paper and subsequently covering the binding in vellum which has been shaved down until it was transparent which protected the painting. In his bindery, according to Tidcombe p.86, he employed “about forty women for folding, sewing, mending and collating work, and in addition, five more women worked in a separate department, to design, illuminate and colour the vellum”. The five included Smyth, one of the most prolific of those women, and Jessie M King. a fellow Glasgow School of Art graduate. This binding is particularly rare as it is signed by the artist.
As well as her work for Chivers, Smyth travelled and exhibited widely, being also known for her costume design and working in theatres in Stockholm, Paris and London. She later took on teaching roles at the Glasgow School of Art, specialising in teaching miniature painting and the history of costume.