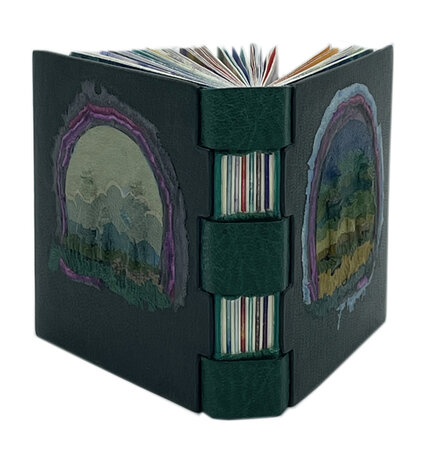 < >
Written, illustrated and bound by the great Philip Smith

PHILIP SMITH, designer bookbinder. ~ A Book of Colour and Sayings. With a Credo.

24 pages, including the monogrammed title page, of handwritten sayings, quotations and his own philosophical text by Philip Smith with 76 pages and endpapers painted in acrylic washes by Philip Smith. 24mo., miniature ‘lap-back’ binding sewn on four raised cords, painted papers show at open spine leather yokes and ends of sewing supports glued to endleaves. Boards, shaped and recessed inside to accommodate quarter-joint yokes and covered with blue goatskin, infilled and glued to end leaves over yokes, split airfix figures onlaid on front and back showing front and back views, with a typical Philip Smith maril and goatskin design. With full explanation of the binding by Smith, pasted to final leaf and signed and dated on the lower pastedown. Housed in the original chamois leather pouch.

Philip Smith was one of the greatest British bookbinders of the 20th century and was well-known for inventing several techniques including the ‘lap-back’ structure which allows the book to open fully and so an image or configuration can be created across both boards. His first major invention was ‘maril’ which can also be seen here - it involved mixing scraps and fragments of leather parings and compressing them to create a block or thick tile from which parings can be taken to build up images or for onlays or inlays.
He also invented yokes which can also be seen here which reinforces the joints and allows for full opening.
The philosophy of Non-Duality was the driving force behind Philip’s work - that there is only One Consciousness and that everything is Consciousness without which we would not be alive and all our perceptions, inspirations and ideas arise in consciousness. The text of this book is his exploration of his theory as is the binding.