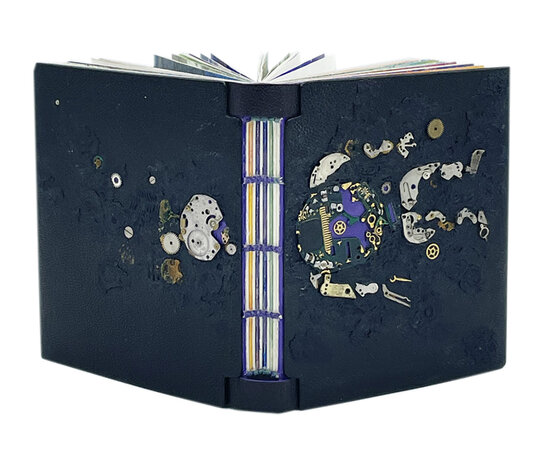 20 pages, including the title page, of his own philosophical text on ‘Consciousness’ by Philip Smith with 52 pages and endpapers painted in acrylic washes by Philip Smith. 7.8 x 9 cms, ‘lap-back’ binding in black and purple morocco with two yokes laminated from vellum, sewn on four raised purple cords. The boards are covered wrist watch parts, some inset and some onlaid, with onlaid emulsified maril and morocco in the form of a figure, acrylic paint touches to edges of yokes. With full explanation of the binding by Smith, pasted to final leaf and signed and dated on the lower pastedown. In fine condition in the original purple felt pouch.

Philip Smith was one of the greatest British bookbinders of the 20th century and was well-known for inventing several techniques including the ‘lap-back’ structure which allows the book to open fully and so an image or configuration can be created across both boards. He also invented vellum/laminated yokes which can also be seen here which reinforces the joints and allows for full opening. His first major invention was ‘maril’ which can also be seen here - it mixing scraps and fragments of leather parings and compressing them to create a block or thick tile from which parings can be taken to build up images or for onlays or inlays which is evident on these boards with the watch parts.
Philip Smith was driven by philosophy and here we have an espousal of the credo behind his creativity written in his own hand.