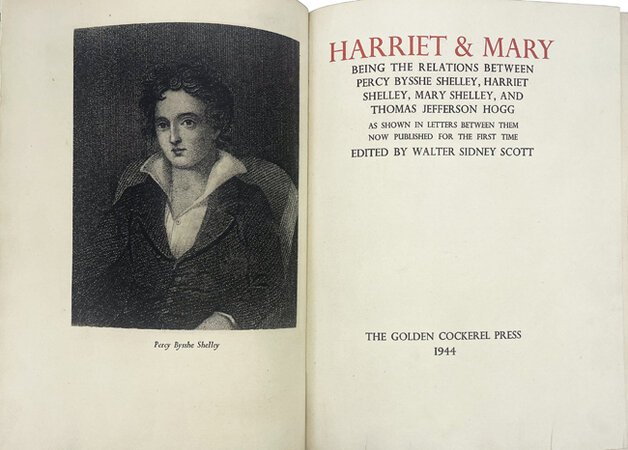 GOLDEN COCKEREL PRESS. SHELLEY. ~ Harriet & Mary. Being the relations between Percy Bysshe Shelley, Harriet Shelley, Mary Shelley and Thomas Jefferson Hogg as shown in letters between them now published for the first time.

Edited by Walter Sidney Scott. Portrait frontispiece of Shelley. No. 187 of 450 ordinary copies. Printed in Perpetua type on Arnold's mould-made paper. 4to., original quarter brown morocco with blue buckram boards, top edge gilt, others uncut. Slight fading to spine, marking to morocco and rubbing to boards and bumping to corners.

The letters with which the book is concerned were written by Shelley to his friend Thomas Jefferson Hogg during a period of estrangement occasioned by the attachment of Jefferson Hogg to Shelley's first wife, Harriet, and also the letters of Mary Godwin to Jefferson Hogg during 1815 after Shelley's desertion of Harriet and elopement with Mary. Here they are published for the first time edited by Walter Sidney Scott who had married into the Jefferson Hogg family.
The book is part of a trilogy from the Press which included The Athenians and Shelley at Oxford.