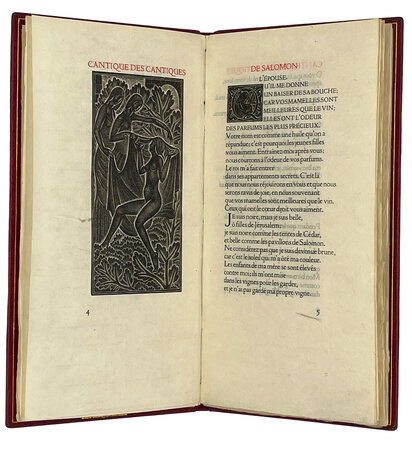 One of only 50 de luxe copies printed on japon with roman numerals, this L or no.50, of a total edition of 158. There were other editions in Latin and German. 11 original woodcuts and 13 initials by Eric Gill, with headlines across each page printed in red. Tall thin 4to., in a fine binding by Sangorski & Sutcliffe of full red crushed morocco with gilt rules round each side and using Gill titling on the upper cover, spine in compartments with raised bands, turn-ins with gilt fillet and signed by S&S on the front turn-in, top edge gilt, others uncut. A superb copy.

The book was the last to come from Kessler’s Cranach Press and was a triumph. Kessler himself expressed his enthusiasm for Gill’s engravings in a letter to the artist “I think it is one of the most beautiful series of illustrations produced in modern times”. Cave, the Private Press experts, believed that the Song of Songs was one of the three exceptional items printed by the Cranach Press, the other two being the Hamlet and the Eclogues.
Sangorski & Sutcliffe had made all the morocco bindings for the vellum copies of this French edition. There are variants of the japon de luxe edition with blue lettering.