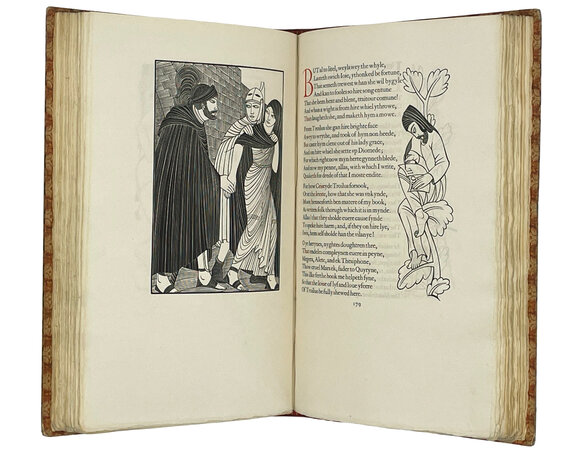 < >
The first, and scarcest, of the three Great Books produced by Gill and Gibbings at the Golden Cockerel Press

The scarcest and the first of the three Great Books produced by Gill and Gibbings at the Golden Cockerel Press, having a relatively small limitation. The engravings are full of life and movement and paved the way for Gill’s Canterbury Tales which was soon after printed at the Press.
Chaucer’s epic poem is here printed in Middle English and tells the story of the ill-fated lovers against the backdrop of the Trojan War, Troilus being the youngest son of Priam, King of Troy, and Criseyde being the daughter of the Trojan Priest Calchas who joined the Greeks having foreseen the defeat of Troy. Gill clearly enjoys the theme and the flowing Greek and Trojan robes and tunics - his image of Chaucer at the end is particularly charming.