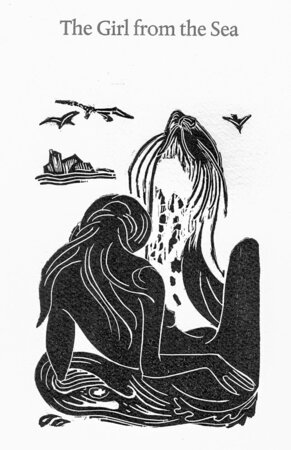 One of 195 copies. First edition. 27 wood engravings, wood cuts and lino cuts by Michael Onken printed at the Old Stile Press by hand on Velin Arches paper in Albertina type. Folio, bound by The Fine Book Bindery in quarter blue cloth with pictorial paper covered boards with an image by Onken, in a grey cloth slipcase with an image by Onken of Mckay Brown pasted onto the front.

Previously unpublished this ‘play for voices’ is about selkies - the seals that surround the shores of Orkney with their deep brown eyes that captivate humans and the mesmeric singing. Mackay Brown had written many stories about them including this one which involves a young man and his elderly parents and the arrival of a beautiful girl who suddenly appears in their midst...
When he was alive Mckay Brown wrote to the press entreating them to “go on for a long time making beautiful book” - he would have been thrilled to have seen what they have done with this play.